Don’t become a mere recorder of facts, but try to penetrate the mystery of their origin.

Sony ICD-B500 Digital Voice Recorder: Voice recorders are so handy! For a working parent, you can create a spontaneous grocery list or to-do lists with just the press of a button. If you tend to get lost in the parking lot, then you can make yourself a note with this little gadget. 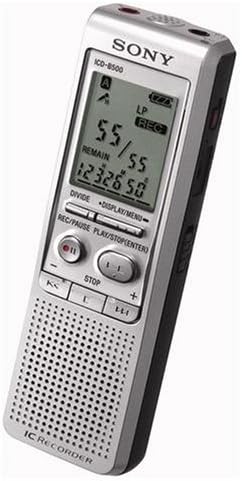 Or if you are a writer or aspiring writer you can create audio files of stories and ideas you’d like to write about. Whatever the reason, a voice recorder is a handy gadget almost everyone could use. Here is my product review of the Sony ICD-B500 Digital Voice Recorder.

This little gadget from Sony fits right in your hand. It’s silver and has a large LCD screen. The screen is pretty easy to read. The Sony ICD-B500 Digital Voice Recorder has a 256 MB of memory installed and you can delete and re-record. It has a built-in microphone that is highly sensitive. You can set the volume of recording and playback. There is one mono speaker in the Sony ICD-B500 Digital Voice Recorder. It also features a digital clock and uses tripe A batteries to run. Leave your voice recorder on accidentally and after about 22 hours you’ll need to replace the batteries.

The Sony ICD-B500 Digital Voice Recorder works like this. Slide the HOLD button on the right side of the recording to the off position. You’ll know it’s off hold because the display will come up and the word HOLD will disappear from the screen )if you’ve recently been using it). Next, adjust your volume along the side by sliding the knob up or down. The higher you slide it the louder your recording and playback.

The Sony ICD-B500 Digital Voice Recorder is very sensitive so there is no need to shout. When you are ready to record press the red RECORD button above the Volume and Hold button on the right side of the recorder. Speak normally. When you are done speaking press the STOP button. It will automatically playback your most recent recording after you finish. Just press STOP again if you don’t need to hear it.

There are a few tips you should know before using the Sony ICD-B500 Digital Voice Recorder. First, consider using the PAUSE button instead of STOP if you just need a moment or two. Pressing STOP, even for a moment will cause your recording to move to the next section.

The Sony ICD-B500 Digital Voice Recorder costs around $44 and can be purchased at Nextag, Amazon and almost any tech store. I love my handheld recorder and take it everywhere. As a writer, I found it impossible to find a pen or pencil sometimes. When I am driving it makes life so easy to record ideas and stories that I would normally forget about. I would recommend this product to anyone who needs a recorder.

A Godsend for Consumers: "If you want to be smart, be smart in the shower....
Read more

Biggins Completes "Whoever controls work and wages, controls morals." Ah, the simple potato! Who would ever think that...
Read more
Outdoor

Akify is a participant in the Amazon Services LLC Associates Program, an affiliate advertising program designed to provide a means for sites to earn advertising fees by advertising and linking to amazon.com. As an Amazon Associate, I earn from qualifying purchases.