Brookstone’s Shower Radio: Listening to the Brookstone’s Shower Radio in the shower is a great way to start off a morning. Singing along will put you in a good mood and get your energy up so you are ready to go for the day. Having a radio in the shower makes the start to your day more enjoyable. If you are looking for a good one, consider the Shower Radio from Brookstone. This product sells for $50 and has a bunch of features that make it worth the price.

Brookstone’s Shower Radio has an attractive design. It is white with silver accents so it will fit well with the décor in many bathrooms. The radio is obviously water-resistant so you can safely use it in the shower to listen to music or the morning news. There is also an analog clock on the device so you don’t enjoy your time in the shower too much and end up being late for work. 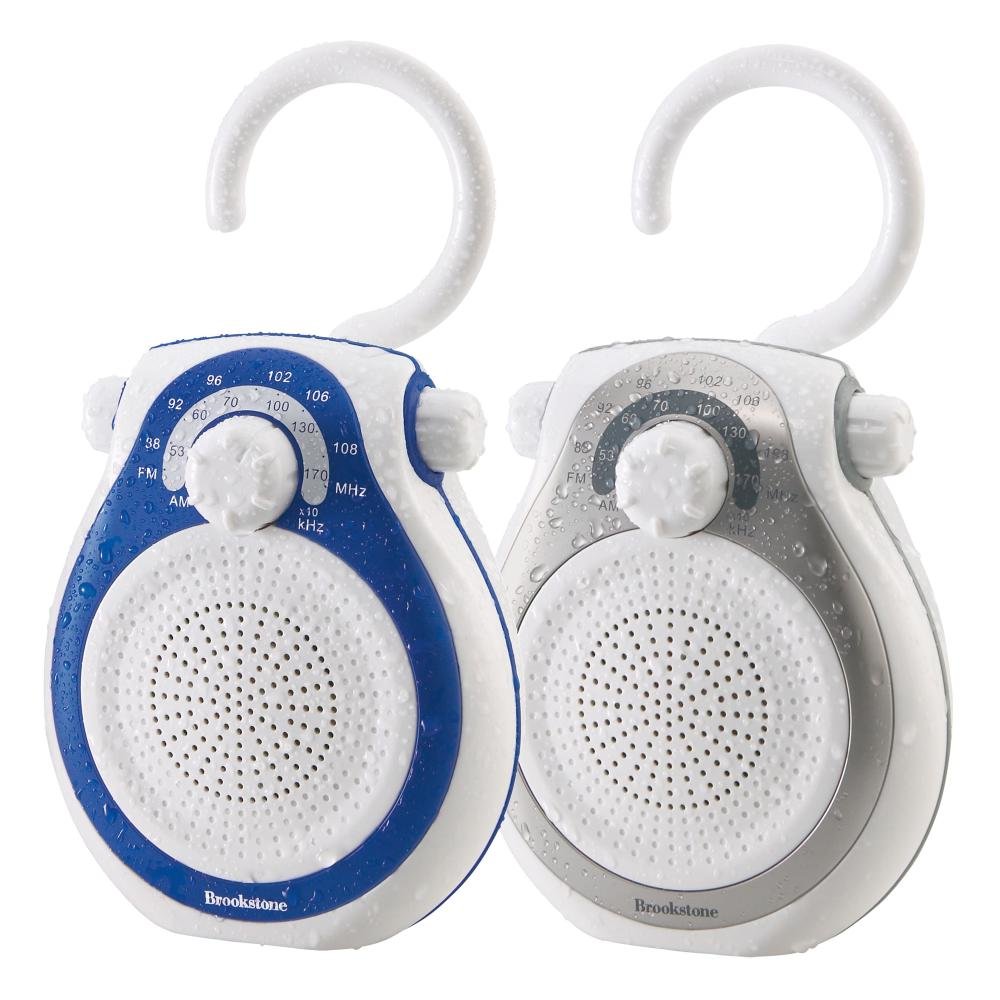 The Brookstone’s Shower Radio is easy to use even in the morning when you are groggy and have wet hands. There are presets for six stations so you can simply set your favorites and just use those buttons. It also has big digits and buttons that make it easy to use. I bet older people would also appreciate the larger size of these parts even for use outside of the shower.

The radio runs off of four C batteries which I find to last for months at a time. There is a 20-minute auto-shutoff to help preserve battery life. You can hang the device up by its suction cups if you want to mount it to the wall or you can use its lanyard and hang it from the showerhead. I was worried about the strength of the suction cups and have had mine fall a couple of times. After the first time, I began wrapping the lanyard around the curtain rod to catch it just in case. For the suction cups to work effectively, your shower wall must be completely flat (like tiles).

The sound quality in the Brookstone’s Shower Radio was surprisingly good. Our house is full of metal and many radios do not get good reception inside, so I was skeptical about buying this product, but most stations do not receive any static. Unlike another radio I used to have in the shower, the volume goes loud enough for me to be able to hear it over the water. Overall, I enjoy using this product and am pleased with its quality.

How to Become a Blog Product Reviewer

A Godsend for Consumers: "If you want to be smart, be smart in the shower....
Read more

Biggins Completes "Whoever controls work and wages, controls morals." Ah, the simple potato! Who would ever think that...
Read more
Outdoor

Akify is a participant in the Amazon Services LLC Associates Program, an affiliate advertising program designed to provide a means for sites to earn advertising fees by advertising and linking to amazon.com. As an Amazon Associate, I earn from qualifying purchases.